If we had been listening to Indigenous voices up to now, the crime scenes being unearthed all over Canada would not come as a surprise to us. A tragedy, an unspeakable crime, cause for reflection, reparations, and reconciliation — yes. But not a surprise. 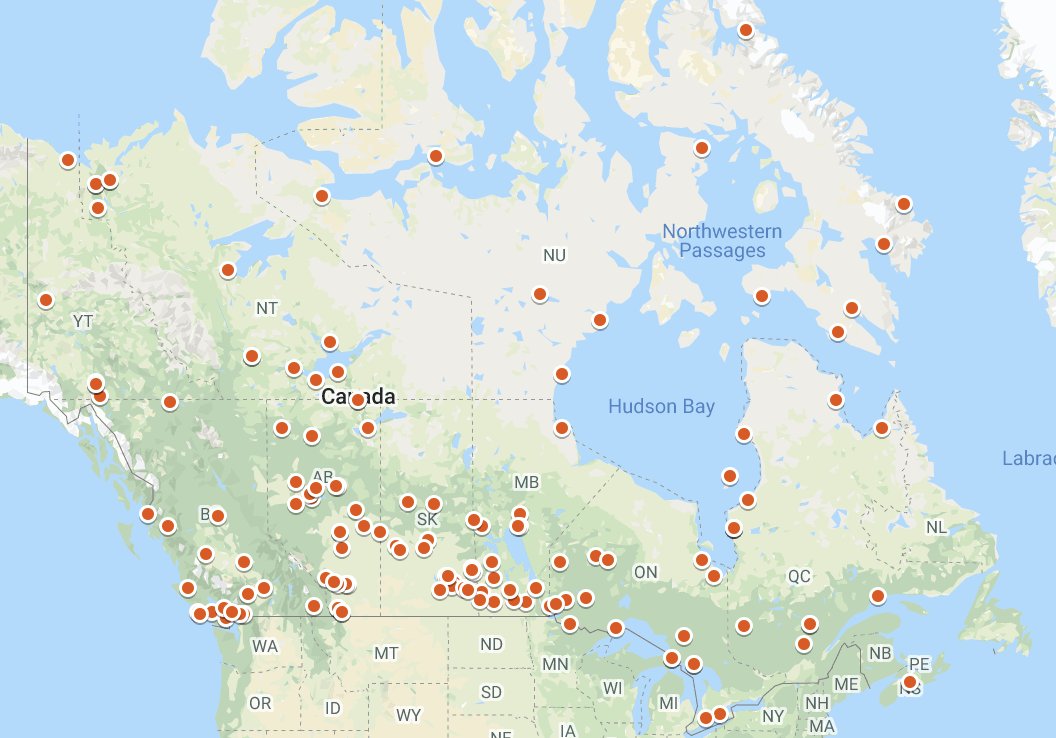 Map of Canada with pinned locations of all residential 'school' sites. Sourced from this tweet from MP Mumilaaq Qaqqaq.

Without constant campaigning and awareness, even the most horrible of crimes can be forgotten. We’re working with Indigenous people and non-Indigenous supporters to make sure that doesn’t happen. We’re going to highlight a few of these below.

Recently elected national chief of the Assembly of First Nations RoseAnne Archibald said in her victory speech, “With the recent discovery and recovery of our little ones across this country, we are all awake and what people need to understand and what people need to come to terms with is how settler Canadians have benefited from these colonial practices and how we, as Indigenous people, have been the target of genocide. We are going to stare this straight in the face and kick colonial policies to the curb. Change is happening.”

While non-Indigenous folks in Canada are reckoning with the reality of their colonialist heritage, those of the First Nations are reliving generational trauma and still dealing with the impacts of inequity and injustice every day. It is vital that the focus remains on them, and that non-Indigenous people make a concerted effort to listen and act, and avoid speaking over those whose voices should be leading this conversation.

Mumilaaq Qaqqaq, MP for Nunavut, has recently announced that she would not run again for her seat, but would be focusing on her own needs and life. Her legacy as a politician leaves non-Indigenous people with a clear guide on the journey to acknowledging historical injustices, and redressing current inequity:

Before I was elected as an MP, I gave a speech in the House of Commons as part of a mock parliament for young women. I spoke of the toll that the suicide crisis has taken on my community and of my lost friends, classmates and teammates and asked, “Where are our non-Indigenous allies?” As I ask that question again today, I see more of you and more Canadians from all walks of life waking up and showing up. This is a good shift. Indigenous peoples cannot and should not shoulder these burdens alone. They were imposed on us by Canada, and we need Canadians to play an active role in dismantling them. That means staying angry and standing alongside us to amplify our voices. Above all else, it means listening to us and actually changing things when we tell you that we are hurting.

So far, there have been 3083 submissions on her campaign to Put Indigenous Languages on Elections Canada Ballots/Respect Indigenous Voters, and this isn’t the only campaign she’s running. Calling on Attorney General David Lametti to investigate crimes against Indigenous people, Qaqqaq and MP Charlie Angus are giving a clear roadmap to begin the process of justice and reconciliation.

The map of Canada is covered with crime scenes.

We need a special prosecutor to conduct an independent investigation into Canada's genocidal residential "school" system.

There have already been more than 15,000 voices calling on the Attorney General to establish an independent investigation, more than 15,000 people standing in solidarity with Indigenous communities.

The Native Voice Network worked to ensure that Native voices were heard in the US presidential elections, the appointment of the next supreme court justice, and in the census. “The U.S. Census Bureau decided to end the census one month earlier than the October 31 deadline. Let’s be clear of what’s at stake for American Indian and Alaska Natives: An undercount could lead to losing as much as $1 billion per year nationally in resources that our Native communities rely on for healthcare, schools, roads, and other essential programs and services. This is a deliberate act to try to draw resources away from American Indians, Alaska Natives, and other hard-hit communities of color, while we’re focused on responding to and recovering from the pandemic. We will not be erased. We will be visible and we will be heard.”

You can support their latest initiatives here.

The British Columbia Assembly of First Nations launched a campaign to encourage advocates to write to their senators and encourage them to pass Bill C-15. This bill would see Canada finally ratify the United Nations Declaration on the Rights of Indigenous Peoples, more than a decade after it was initially proposed and ratified by 144 counties. So far, almost 1,500 emails have been sent. Add your voice.

The Assembly of First Nations (AFN) has issued statements on the recent discoveries of mass graves, but the inequities and injustices faced by First Nations in Canada continue, and while they have called for rest and reflection among Indigenous people, it is clear that a lot more work still needs to be done. From keeping a resource centre on the COVID-19 pandemic which disproportionately affects Indigenous people, to maintaining a contact database for housing, water, and emergency services, to “enhanc[ing] the exercise of First Nations’ self-determination and jurisdiction within the context of the natural environment,” AFN’s work is comprehensive and complex, and New/Mode is looking forward to amplifying their impact in the coming days.

The Union of British Columbia Indian Chiefs (UBCIC) is currently working on maintaining a COVID-19 emergency resource site along with the First Nations Summit and British Columbia Assembly of First Nations, with information on bulk orders of personal protective equipment, financial resources, leadership information and guidance, and resources for mental health awareness and support. You can donate to their initiatives, or get involved in their latest campaign.

Honor the Earth, a Native American organization whose aim is to “create awareness and support for Native environmental issues and to develop needed financial and political resources for the survival of sustainable Native communities,” is hosting the Stop Line 3 campaign, featuring a really successful email action to President Biden, with more than 20,000 calls, tweets, and letters.

Their activism does not only exist in digital spaces. They invite allies to come up to the line and engage with frontline camps. They provide training, guidance on being a good relative, and the varied security practices at each camp.

The Nooksack Tribe and Lummi Nation launched their campaign, Salmon Need Water, earlier this year. In their own words in a letter to Whatcom County (Washington USA) Agriculture Board, “Both Lummi Nation and the Nooksack Tribe have been working for decades to recover salmon by restoring and protecting habitat and through responsible, science-based hatchery and harvest management. For more than twenty years now, we have also worked with our partners in WRIA 1 to resolve water use conflicts, including through the Joint Board and Watershed Management Board decision-making structures, yet those efforts have resulted in little meaningful improvement in instream flows. More than once, we have watched as others walked away from voluntary negotiations when the conversation became difficult. We have no confidence that voluntary negotiations will prove fruitful unless and until they occur within the context of an adjudication.” They are asking for supporters to help ensure that the promised funding for adjudication remains in the county budget

There are also plenty of non-Indigenous campaigners working to address the injustices faced by First Nations, through empowerment and advocacy.

The David Suzuki Foundation is calling on the Canadian government to respect Indigenous land rights. They're working to draw attention to the vital role played by Indigenous people in preserving biodiversity, while also bearing the brunt of the impact of climate change and environmental abuses. The foundation is running an effective letter campaign that you can add your voice to.

For the Love of Creation, with support from Citizens for Public Justice, ran a ‘faith-in-action’ campaign earlier this year, calling on Canadian law-makers to “honour the rights of Indigenous peoples by implementing the UN Declaration on the Rights of Indigenous Peoples, including, but not limited to, the right of free, prior and informed consent, and engage in a robust and inclusive dialogue with Indigenous stakeholders to ensure that the action plan envisioned in Bill C-15 is a core priority across departments.”

The NDP ran a campaign to keep the pressure on for Indigenous justice, which saw almost 7,000 submissions, and a whopping 87% conversion rate. This response is indicative of growing support for Indigenous communities, and can help inform future campaigning by the NDP.

Metric Strategies has had 580 submissions on their action, Demand Action for Indigenous Children & Families, which is calling on lawmakers to remember the promises they’ve made to Indigenous communities in Canada, including the provision of clean and safe drinking water for indigenous communities, funding long-term mental health support for Indigenous people, and submitting to a international court on admissions of genocide and apartheid.

North99 is calling on the Catholic Church to release residential 'school' records and apologize for their role in the genocide of Indigenous people and culture.

New/Mode is honoured to play a role in these vital campaigns, but without the collective voices of Indigenous and non-Indigenous people, the work of these organizations and others, and constant pressure on lawmakers, change will happen.

“We all want our children to grow up proud and surrounded by love, culture, ceremony and language and safe and vibrant communities. We want a mother earth for them that is not threatened by wildfires and climate change and wildfires and a warming planet. We want to be good ancestors and leave a strong legacy for the seven generations ahead.”